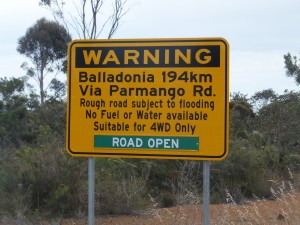 It was one o’clock when the bitumen turned to gravel. Before us were roughly 200 kilometres of unsealed road. According to the owner of the road house in Condingup we should be able to make it to the other side before dark. Not that we were in much of a hurry, we planned to stay the night in an abandoned homestead somewhere two thirds of the way. The first 10 k of gravel were easy. I, with virtually no experience on unsealed roads, had the bike going at a steady 50 km/h. I remember thinking: ”This is easy, what’s the big deal?”. But we were warned about the road conditions. It hadn’t been graded in over 15 years, when wet it becomes a slip and slide galore and when it’s dry it’s the bull dust you have to watch out for. If only I knew what bull dust looked like!! Fifteen kilometres in, the road started to get rougher. Dad, on his Yamaha XT660, was well behind me. The bikes were fully loaded. We both carried our tents, sleeping bags, inflatable mattresses, clothes, and between 7 and 10 litres of spare fuel. On top of that, Dad also had 10 litres of water on his bike and I carried most of our food supplies. Al this stuff was now bouncing around on the bikes on a road that was getting worse with every kilometer we covered. Believe it or not, I loved it. It was what I got this bike for. This was the reason I decided to buy the little Yamaha XT250 I am riding. I’m too short to ride one of those big enduro adventure bikes but this bike I fit on and I can take it everywhere, on the road and off road. With every pothole I needed to avoid the smile on my face grew wider. With every rock I needed to negotiate I became happier. 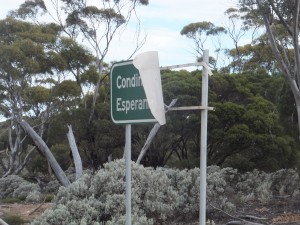 But I would be lying to say it was easy riding. It had been raining the days before we took off. Big puddles forced us to zigzag from left to right across the road. Until I got a bit to confident, riding a bit too fast and found myself with no choice but to go straight through a massive puddle. All that went through my head was : “Don’t brake, don’t steer, don’t brake, don’t steer…” . I miraculously made it through with only a lot of mud on me. Around 4 in the afternoon we were about halfway. We were averaging 30 km/h, on motorised machines not push bikes! We took a break where a side road was going off the main track. A sheets of metal was half attached to a pole, something that used to be a road sign. At this point grass started to appear in the middle of the road, leaving just two tire tracks of rocky gravel to ride on. It had been pretty challenging so far, but the best and worst was yet to come. 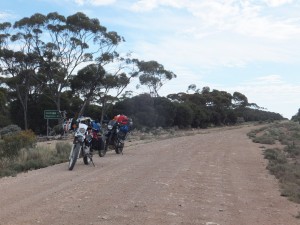 Just past halfway, our rocky little gravel track started to get real corrugated. Really, really corrugated. The deepest or biggest, however you want to look at it, corrugations I’ve ever seen. I’m pretty sure some were about knee deep! Massive! And if that wasn’t challenging enough, he puddles got bigger too. So big that we had to ride on the edge of the road, our handlebars pushing through the branches of the bushes. Until Dads handlebars caught on to some of this lovely vegetation and he went slip and slide, face down in the puddle. I saw it happening in my mirror, and I could hear it happening from all the swearing behind me. Luckily Dad was all fine. But we now faced the challenge of lifting a 200kg bike plus gear out of the slippery mud. After a dozen attempts and removing all the gear we finally got the bike upright again. 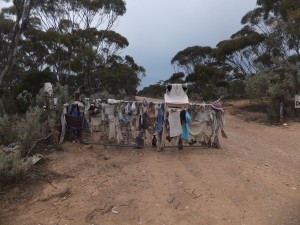 On the next stretch of road I had my first upclose encounter with Australian wildlife. An entire family of emus ran across the road, less than 20 meters away from me. And again all I could think off was : “Don’t brake, don’t steer, don’t brake, don’t steer…”. Managing to stay upright once more, I was then proudly escorted by a mum and kid kangaroo. Hopping along the road with me. And although I love wild animals, I really like them a lot less when there is a chance of them ending up under my front wheel! 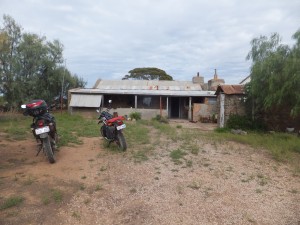 With all the obstacles we faced this afternoon we were incredibly happy to reach the homestead while the sky was turning pink with the sun setting. The little homestead was a well deserved home-away-from-home. After a good night sleep we were confident to quickly finish off the last bit of this rocky road. Unfortunately Dad had another up-close encounter with the mud, but hereafter we made it to the other side. Where 1600 km of bitumen, with no trees were waiting for us.