The road entering Cambodia lead through some forest and was almost deserted. A truck in front of me was sticking to a roughly 50 km/h constant speed as I approached him, but when I started overtaking, without any warning or use of indicators he decided to swing to the left. I hit the brakes hard and managed to just avoid him. Welcome to Cambodia, right! Not much later another truck caught my attention, parked on the side, the cabin tilted to expose the engine. As I came closer I saw a man lying underneath, but instead of his hands reaching up fumbling with bolts and nuts his arms were on the ground and his eyes closed. For a split second I thought he might be injured, until I realised he was just taking a nap, on Cambodian’s highway number 4 in the shade of his broken down truck. That’s totally acceptable. The trip continued through more forest areas and over some hills. Villages were small and only past sporadically. At this point my fuel light started blinking. Against my principles I had to get petrol sold in a reused water bottle to get to the next village where they pumped the fuel straight from the barrel. The first actual fuel station was only spotted 150 km after the border. 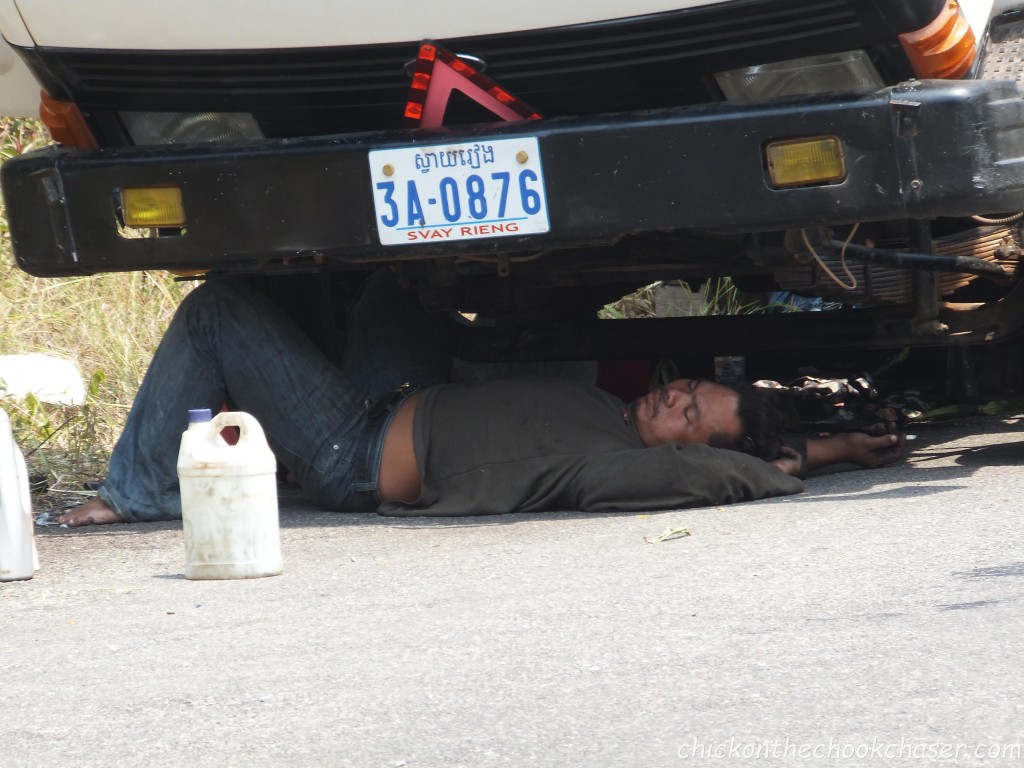 After two smaller highways merged into a bigger one leading to the capital Phnom Penh, the amount of traffic increased. Lots of slow old trucks being overtaken by big 4x4s. These bullies of the road show absolutely zero respect for their fellow road users. Twice I was forced off the road into the gravel at speeds exceeding safe limits to do so. Luckily my gravel skills are sharpened after those thousands of miles in Australia. After two dusty encounters with the side of the road I learned that drawing attention using my indicator had some desirable effect, there was however still the need to hit the brakes hard every now and then. Apart from having to anticipate the off road monsters there were other moving obstacles at play. Mainly cows, and lots of them, crossing the road at any given time. The worst thing to encounter though, were the trucks with pigs. Three layers of pigs in cages and when you are riding behind them little drops of I don’t want to know what are flying in your face, yuk! 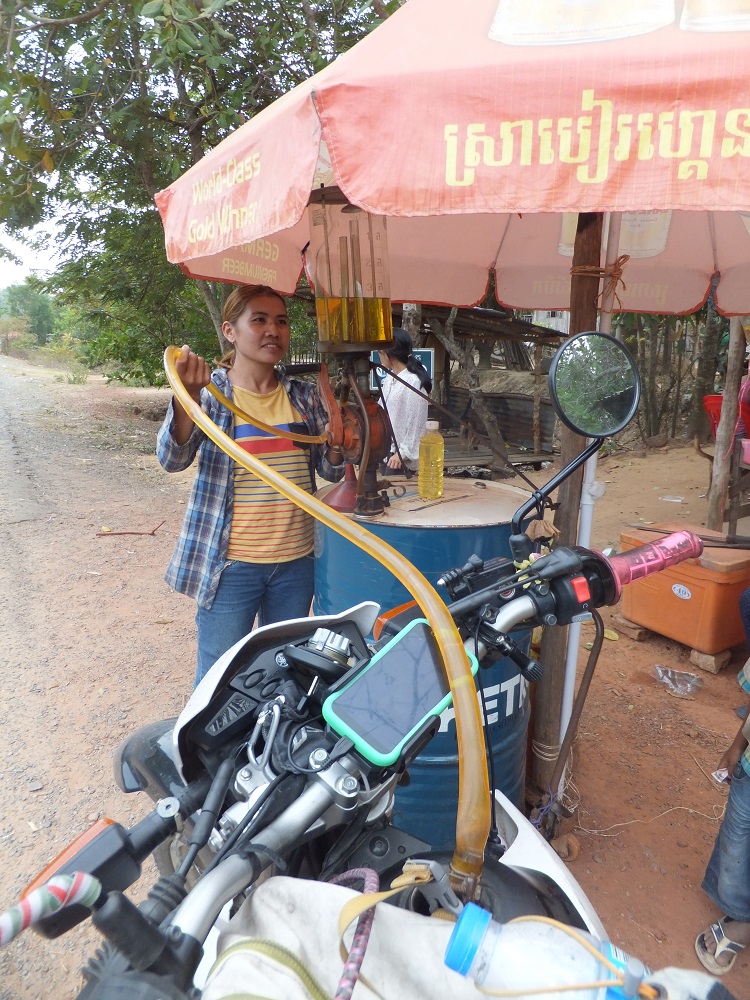 Closer to Phnom Penh there were more towns and more chaotic traffic. Minivans with scooters hanging of the back, tied on with disintegrating pieces of rope. Tuk tuks, scooters with sidecar constructions (for lack of a better word) bicycles, kids playing you name it, it was there. I’ll try to paint the picture: You’re riding on a slab of tarmac with some vague white-ish residue on it. With a stretch of imagination you’d say this was meant to be two lanes each way. In actual fact there are the trucks in the middle two lanes, the 4x4s overtaking the trucks in the lane “designated” for oncoming traffic, then in the “slow” lane on the outside are the scooters and motorbikes. They vary in speed from 25 to 70 km/h, some of them skilfully zipping around other scooters while also passing the trucks. Then on the very edge are the schoolkids riding their bicycles. So far so good, this would work pretty fine, if there weren’t people crossing all the time without as much as a glance towards the oncoming traffic, cows and chickens all over the place, people turning without indicating and a fair few potholes causing the trucks to brake hard. It was chaos. The good news was that no one seemed to care about any rules or manners. So, then neither did I, happily I lane filtered, overtook, undertook, zipped past and squeezed through any obstacles. All while smiling and enjoying the lawlessness.

By the way, did I mention it was really dry, dusty and dirty? Everything on the side of the road was covered in that tell-tale red dust. Later I found a mirror and noticed there was dust stuck in the wrinkles around my mouth that appear when I smile.

Just before entering Phnom Penh city there was a serious traffic jam. All of a sudden the traffic went from two-ish lanes to 6 or 7. People trying to get ahead in every possible way. Four lanes of cars on the tarmac, in the middle of the road a lane of bikes passing the cars, between every lane of cars motorbikes finding their way forward. And then in the gravel and sand, of the road, loads of bikes riding past everything, going so far to the right that some actually knocked things over in front of the shops. Then to make it even worse the cars started using this gravel lane as well, causing great dissatisfaction of the two-wheelers. Honestly, I was waiting for one of the big 4x4s to, monster truck style, ride right over the top of another car. But before this happened the source of the mayhem was identified, we were at a roundabout and the police was “organizing” traffic around this point. 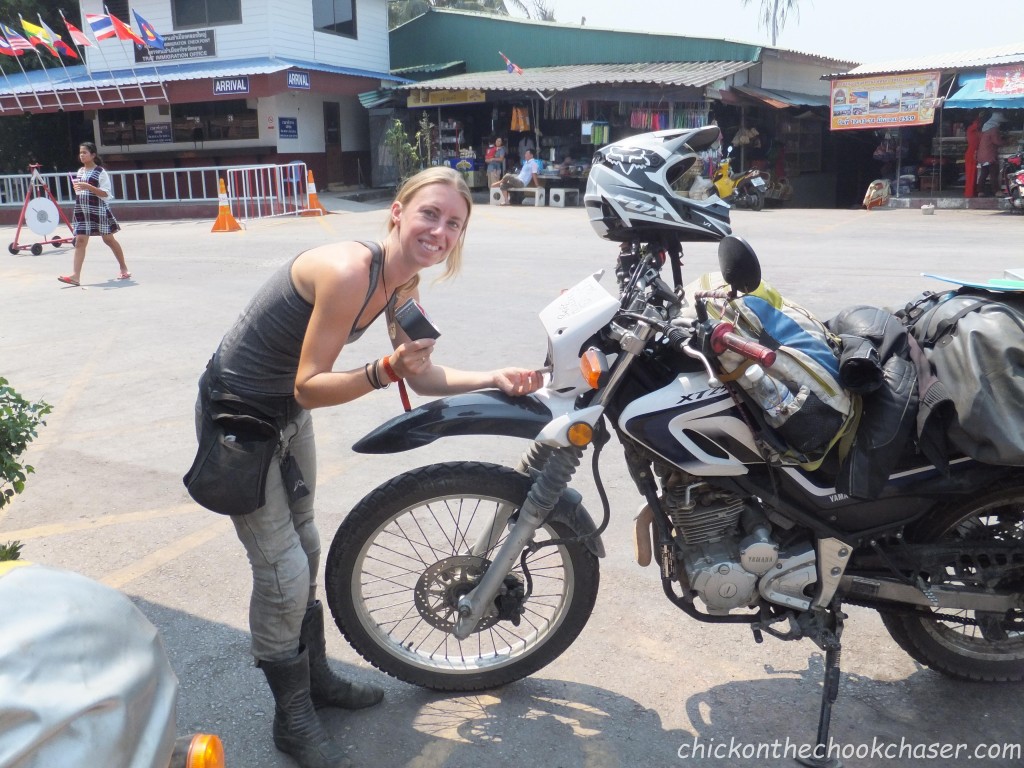 After the situation at the roundabout I effectively entered Phnom Penh city, but the entire city was gridlocked. At this point, banked up, and very slow moving traffic was my friend, nothing really bad can happen if there is no speed involved. It took about 45 minutes to complete 6 kilometres. On the whole trip, 300 km from the border to the hostel, there were only 3 sets of traffic lights and one roundabout. All other intersections were of the self (dis)organising kind, you just slowly push in and force the other traffic to stop. Not many times have I been so relieved and grateful to simply arrive at a hostel, I was alive and in one piece and so was the bike. When later that night a backpacker asked why I was so tired, the best I could explain it was: “Well, I played real life Mario kart for 6 hours straight with my life at stake”