No trees and beef jerky 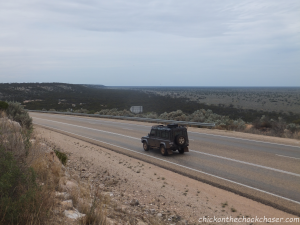 The Nullarbor, null arbor, literal translation no tree. And no-tree is not the only thing that isn’t there. Basically there is nothing there except grey nomads (i.e. travelling pensioners), road trains (i.e. 3 trailer long trucks), roadhouses (i.e. petrol stations) and roadkill. That goes on for about 1600 km and includes Australia’s longest straight road, 146.6 km without bends. The Nullarbor is the main highway connecting the east and the west on the south side of Australia. Apparently it is a bit of a thing to cross the Nullarbor. When I told people about my travel plans, that we were going to cross the Nullarbor, they all told me I was crazy. Of course I already knew I don’t fit into the normal box, so that didn’t come as much of a surprise. Crossing the Nullarbor was pretty cool though, it is different from any place I’d been before, like a separate little country. A country where the roadhouses with their caravan parks are the cities 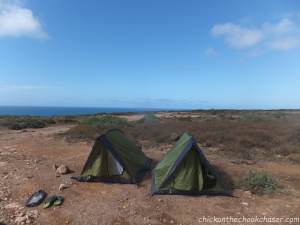 and there are no permanent residents.

Since the Nullarbor goes through the dessert, which does sound a bit dangerous, we were well prepared. Spare fuel for both bikes, food for 4 days and 15 litres of water. There are fuel stations pretty much every 200 km, most of them have water as well, but it is better to be safe than sorry. Going through the dessert, the Nullarbor gets rain 4 to 5 times a year, we expected it to be hot and dry. Wrong! On day 1 it was dry and fairly warm, but day 2 was freezing and we managed to just escape a massive downpour. Waited 2 hours at a roadhouse for the rain to stop to set up the tents. The sign at the road house said: “Welcome to 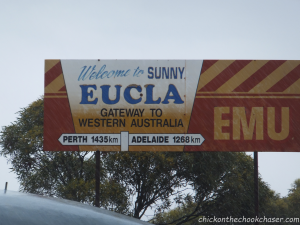 The main thing I will never forget about the Nullarbor are the animals. According to the road signs there could be camels along the road. So since the road wasn’t that challenging I kept myself busy searching for camels. Too bad, no luck with those! What we did see was kangaroos, unfortunately mainly dead kangaroos. On average there would be a dead kangaroo every 2 to 3 km. Which did add a bit of a challenge to the road, you had to zigzag to avoid the roadkill. Being on a motorbike, you don’t only see the roadkill you can smell it too. It wasn’t until months later I realised what it smelled like. The smell of roadkill is exactly the same as the smell of beef jerky. I don’t think I can ever again eat beef jerky!