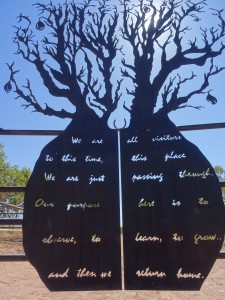 Let’s find out when it’s low tide. We stopped at Home Valley to see what would be the best time to cross the tidal Pentecost river. We asked the girl at reception when low tide would be. She responded it didn’t make much of a difference, only a few centimetres. We explained that on a motorbike a few centimetres can make a massive difference. Her immediate response: “Oh but we only advise people to cross in a 4-wheel drive.” I explained that it would be highly unlikely my motorbike would grow a set of training wheels over the next few hours. She then checked the chart and told us low tide would be at 4.20 PM. It was 1 PM now. Plenty of time for a relaxed lunch before setting off to the actual crossing. 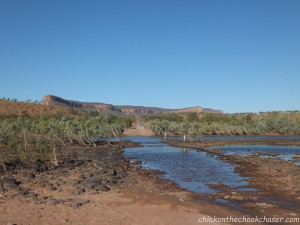 At 1.30 PM we arrived at the crossing, parked on the side to observe the situation and wait for the water level to drop. This was it, this was the 100 metres of rocky, bouldery river crossing I had both feared and looked forward to for the past 1000 km. It was almost the end of the Gibb river road, if me and the chook chaser wouldn’t cross we would have to go back 600 km and detour another 700 km… When I saw the first cars going through, that all of a sudden seemed a splendid idea. Their entire wheels were in the water, up to the bull bar. These big 4x4s were bouncing around on the boulders like little bubbleheads. But we didn’t come all this way to just give up. The only way I wasn’t crossing would be if there was a ute offering to put the bike on the tray… 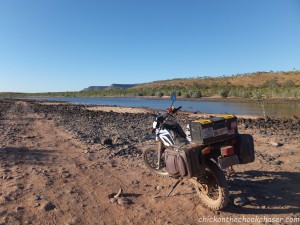 Before taking the plunge people usually stopped to take pictures. Plenty of people came over for a chat, curious about what we were doing there and especially what the bike was doing there. Once I told them I was gonna ride it across, they were all too keen to give me a free coaching session. Across the board the advise was: go slow and steady. Just don’t open the throttle when you hit a bump or make an unexpected move. One guy advised to first walk through to assess the situation. Salt water crocodiles have been seen in the area, therefore we were a bit apprehensive at first … But not knowing what I was taking the chook chaser through… I walked. The water came up to my knees, over my knees in some spots. Now I’m not that tall, but that’s still a good 40 cm. 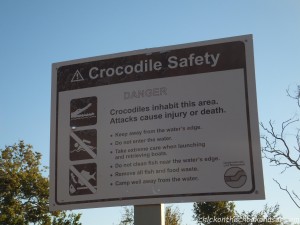 It wouldn’t be easy but it had to be done. But if I dropped the bike now… That might mean no more Asia adventures… I visualized the appropriate responses to the bike bouncing around, not opening the throttle. I visualized myself making it across safely… By 3.30 PM the water had dropped a significant 5 centimetres, by 4 PM it had dropped even a bit more. The wind started to pick up. This was my sign, I had to go now. Lisette crossed her fingers of one hand and held her camera in the other, I turned on the Gopro. One more deep breath and I was off.

The first bit wasn’t deep at all, a piece of cake, then after the middle it started getting deeper. 50 meters to go. Feet up, keep breathing! Slow and steady, slow and steady… The bike had some serious drag with the panniers touching the water. The engine was roaring in first gear. I’m sorry my poor bike, just hold on a bit longer! Eyes on the bank at all times. C’mon you can do this, slow and steady, don’t do anything stupid…. 10 meters to go and it starts getting shallower… As I ride up the bank I yell out my loudest and deepest victory scream. Woooohooooo!!!! This was by far the hardest, most nerve wrecking thing I’ve done in a very long while!

Lisette safely drove Jack through as I videoed her. We partied, hugged each other, jumped up and down when we were both safely across. Slow and steady, winning coaches are always right.