Inspiration in the middle 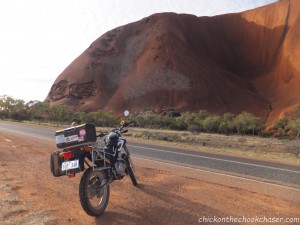 It’s only an hour to Alice Springs the lovely lady at the road house said. Just watch out for the cows on the road. I enquired about the kangaroos but they didn’t see many around here. So although dusk was setting we felt confident enough to complete the last little stretch to Alice. Halfway through I was wondering why it was so hard to see. As we were slowing down to avoid a head on collision with some cattle I realised I was still wearing the tinted glass in my goggles and soon had to change to the clear ones. This hurdle taken we arrived at the famous Stuart highway to complete the last 70 km to Alice. I was in front and it really was getting dark now. But with the amount of traffic here we were sure no kangaroos would dare to be jumping across. Most of the way to Alice there was a set of headlights in the mirror. We were overtaken by some locals every once in a while but I was convinced Lisette was only a little bit behind me. Arriving in Alice I pulled of the road to discuss where to find a campsite. Surprisingly the Jackeroo wasn’t behind me, it was nowhere to be seen! 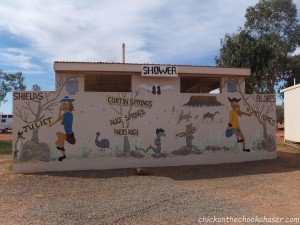 Five minutes later Lisette pulled up beside me. Her dashboard lights had given up on her, most likely, the 800 km of corrugation had gotten the better of one of the connections and now she was left flying blind not being able to see any of the controls.

The reason we pushed to make it to Alice that night was the Finke Dessert Race. In this race motorbikes, buggies and cars race 140 km from Alice Springs to Finke and back the next day. On Friday night, when we arrived, all competitors come together to show off their vehicles to the public. It is a bike enthusiasts/ petrol heads heaven! Motorbikes everywhere, about 600 of them were to compete in the race. One in particular seemed to be getting a lot of attention. Most bikes were motor cross bike, or at least road trail bikes. Not this one, this was a full blown Dakar bike, with a licence plate from Great Britain… 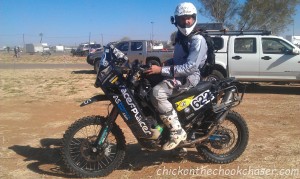 The next day we went to the prologue. Dust and exhaust fumes filled the air as we were making our way through the crowds. We were meeting Scott, a friend of mine here. One of his mates flew over from England to participate in the race. Once we found them we were introduced to Eddie and Lyndon. We exchanged the usual: where are you from and what are you doing? Lyndon explained he rode the big Dakar bike (aka Basil) all the way from England to the middle of Australia and was about to participate with it in the Finke. At first I thought he was joking, but his accent clearly wasn’t Australian, making it 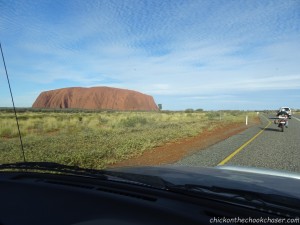 far more likely he was telling the truth. I believed he saw the confusion on my face and reassured us that this really was what he was doing. Damn, that’s cool! Later on we learned the guy is pretty famous, he has his own series on youtube called Races to Places, which shows his adventures as he travels around the world from one race to the next. Definitely felt inspired by his adventures! 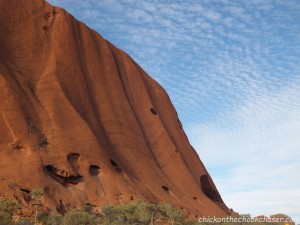 We had a great day at the Finke prologue with Scott, Eddie and Lyndon, but unfortunately we were on a tight schedule to make it to Perth. So the next morning we set off to see the sites around Alice Springs. We took the Mereenie loop road to see the Kings canyon and some of Australia’s most impressive gorges. In Yulara we acquired the necessary paperwork to travel on the Great Central road and then finally made it to Uluru, Ayers rock. It was more impressive than anticipated, the thing is massive. Massive! As we were there late in the day the light of the sinking sun was making the red even more vibrant while the sky was intense blue with a few dots of white. It was stunning.