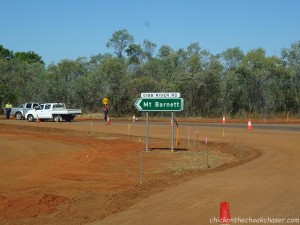 “We advise you to take at least two spare wheels” said the woman at the tourist information center. Right, well, the chook chaser only has two wheels… Jack (the 4×4) has no space to put another spare wheel and we (Lisette and Chantal) really don’t feel like we will need more spare wheels… Realising she meant well we nodded thoughtfully. We had only gone in there to ask the current road conditions and the water level in the Pentecost river. She couldn’t help us with either. So we decided to simply stick to the plan, stocked up on food, filled up all fuel tanks and talk to some locals about the road conditions. All should be fine, the Pentecost will be a bit tricky… But she’ll be right mate! 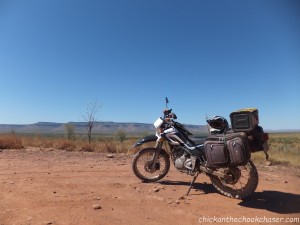 After lunch we set off for the famous Gibb river road, 660 km of gravel surrounded by the pure natural beauty of the Kimberley. Once we hit the gravel it felt good again, it had been a good 2 weeks since the last serious stretch of gravel and I was excited. It felt like home, not much traffic, ant hills left and right of the road, just as it should be. The first night was spend at Windjana Gorge where we were treated to an incredible sunset and a cosy campfire session with some fellow travellers.

My motorbike was inspected by one of the neighbours who noticed the thread on my rear tyre was almost gone! Oops! I hadn’t even thought that would be possible, the tyre had only been on there for 6 weeks! There should be a tyre place not too far, let’s see if they can help out.

On our walk the next morning we spotted fresh water crocodiles sunbathing peacefully on the banks of the stream. This was the first time we saw a croc in the wild, excitement all over! Tunnel creek was next on the list, as the name says, it’s a creek running through a tunnel, sort of like a cave. You can just wonder in with a flashlight and walk through the water. Although it sounds simple it is very impressive. Later that day we camped on the bank of a river. Thousands of cockatoos flew from bank to bank against the backdrop of another spectacular sunset.

On the road the next day we were suddenly stopped in our tracks. Smoke was rising from the scrubs to our left. As we got closer we could even see flames. After examining this potentially threatening situation we decided it was most likely just planned burning. This was later confirmed by other travellers. Much more exciting this day were my first real creek crossings. The first three were quite shallow, but the fourth went much deeper than expected. The tricky thing is, you can’t see what you’re up for when you go in. You just put it in first gear, keep the throttle open while aiming straight as much as you can and hope for the best. Happy to be able to tell you all went fine. 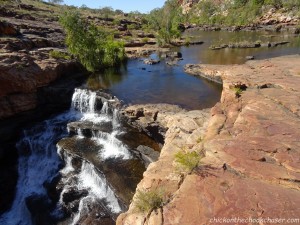 We reached the tyre place. The guys didn’t stock any motorcycle tyres but they were incredibly friendly. They inspected the tyre and concluded that she’ll be right. But also explained to me twice what to do if the tyre would indeed go flat. Filled with optimism we hit the road again, on to Bell Gorge. A stunning, massive waterfall and our shower for the day. In all its beauty this waterfall attracted quite a few tourists. Of course we are tourists too, but when taking the best selfie gets the overhand over respecting the wildlife we were soon out of there.

After all the warnings and stories we heard, the road wasn’t half as bad as we expected it to be. Travelling fast was not an option though, especially when we stumbled upon a stretch showing close resemblance to my primary school sand pit. No matter how deep you dig, there is more sand below. It was just after this we saw two figures on the road, cyclists! Wow, what an immense effort. Later they stopped at the same camp spot and we spent the evening together. Luk and Sophie, a Belgian couple cycling from Perth to Darwin. It was a great night and a pleasure to meet these courageous travellers.

All up we spent about 7 days on the Gibb river road. It is a unique place on earth, and the road isn’t that bad when you’re careful (we did meet someone who blew 7 tyres in two weeks…). The most challenging was the crossing of the Pentecost river. This deserves its own blog J

Thanks for the photos Lisette!